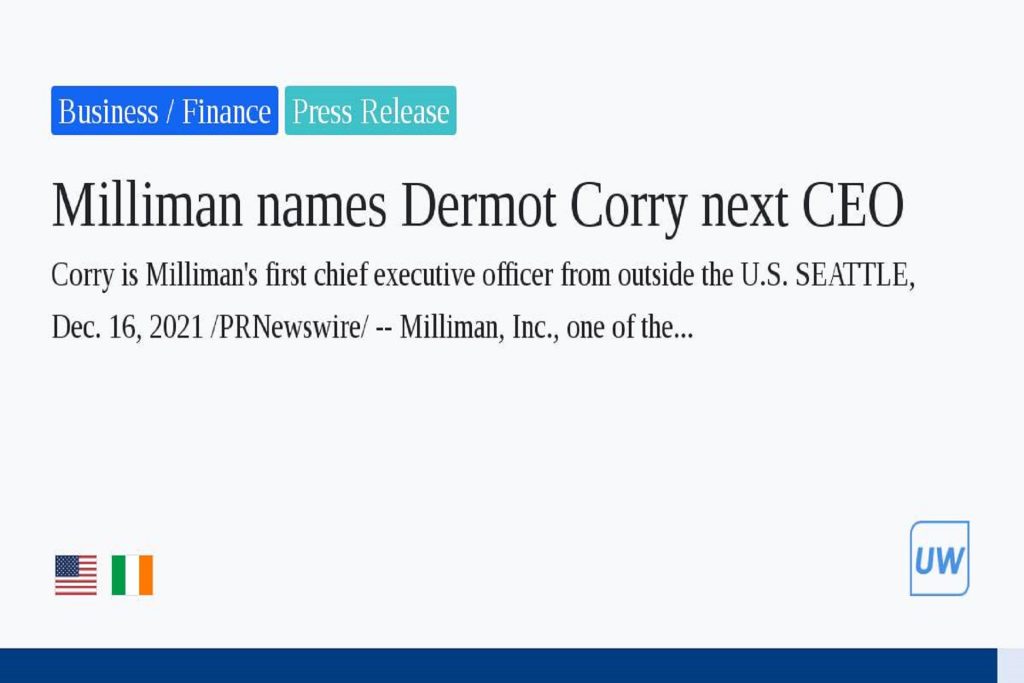 Corry is Milliman’s first chief executive officer from outside the U.S.

Milliman, Inc., one of the premier global consulting and actuarial firms, today announced the election of Dermot Corry as the firm’s new chief executive officer. Corry is a leader of Milliman’s Dublin office and has served as the firm’s Global Life and Financial Services Practice Director and on the Milliman board for the last six years. He is the first professional from outside the United States to be elected CEO of Milliman. Corry’s term begins on January 1, 2022.

Dermot has been a leader since the day he joined Milliman, bringing an essential vision as we’ve evolved to become a global firm,” says Milliman Chairman Ken Mungan. “Dermot is the ideal person to assume this role at this moment of immense change and opportunity, with data and technology revolutionizing the way our clients do business.

Milliman provides crucial expertise to our clients, playing a vital role in protecting the health and financial wellbeing of people everywhere,” said Corry. “We are in an era of unprecedented uncertainty that calls for unique awareness of risk. Milliman brings a data-driven perspective to these volatile times and will continue to be the leader advising on insurance, retirement, and healthcare.

Corry succeeds Stephen White, who will be retiring. During White’s nine-year tenure as CEO, Milliman doubled its annual revenue, reaching $1.4B this year. Milliman opened offices in 13 new countries under White’s leadership and has become a more dynamic, data-driven, and diverse firm.

Milliman is among the world’s largest providers of actuarial and related products and services. The firm has consulting practices in healthcare, property & casualty insurance, life insurance and financial services, and employee benefits. Founded in 1947, Milliman is an independent firm with offices in major cities around the globe.