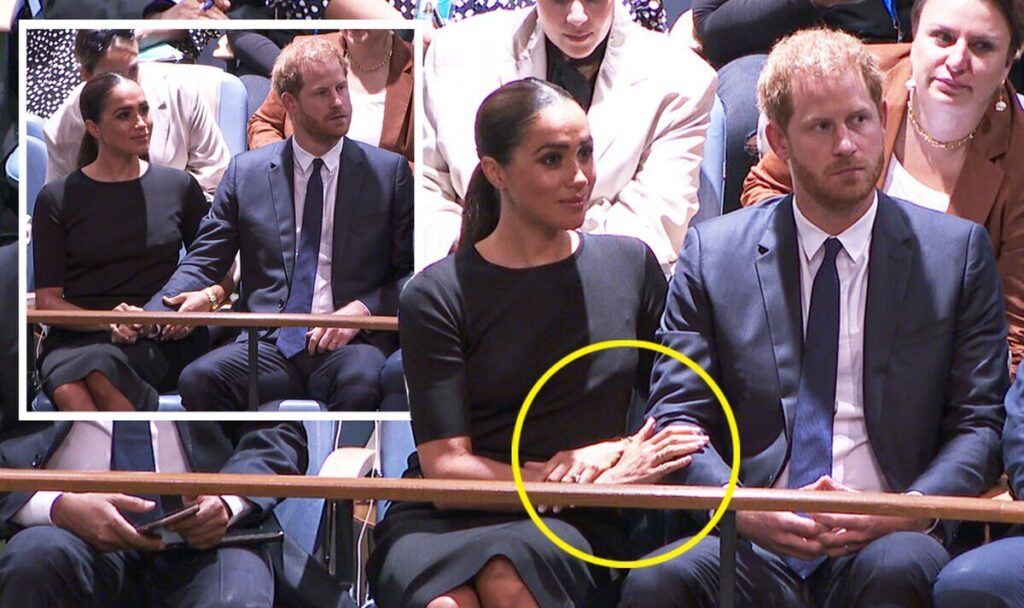 
Meghan Markle and Prince Harry were in New York City on Monday, for Harry to deliver a keynote speech at the UN for Nelson Mandela International Day. Jesús Enrique Rosas, aka The Body Language Guy on YouTube, analysed the Duke and Duchess of Sussex’s appearance and interactions with one another. He claimed Harry’s demeanor changed when Meghan touched him or held his hand.

In his latest YouTube video, Jesús describes the shape Meghan’s hand makes when she holds Harry as a “claw”.

The expert began: “Before Harry had given his speech, they were sitting together, Harry was quite relaxed, you can see his hands on his legs, you can see that Harry was smiling at that moment, with a genuine smile.

“But then Meghan goes and grabs his hands, you can confirm Harry was still smiling at that moment.

“And Meghan does it casually, she was looking at him then looking away.

“The moment she touches his hand, what happens with his expression?

“And she goes again for it – clingy,” Jesús suggested.

“And then he [Prince Harry] looks nervous, he begins with that nervousness, that moment when she grabbed his arm, he begins to rub the flap of his jacket, his knees begin to jump again like he does when he’s nervous.

“His face is also tense at that moment. There are so many signals at the same time!

“He is visibly nervous, and he is venting – when you put your tongue in your cheek, he is doing that, his attitude changed completely,” the body language expert claimed.

“They remain in that position, he is unusually stiff, look at his neck it is totally straight, he’s not moving much.

“He tries to relax a bit, she lets go of him, he begins to turn his ring, wedding ring, twisting it, she touches him. This is a bit more casual, normal.”

Jesús continued: “After the speech, Harry goes back to his seat – this is important to understand the dynamic of Meghan and Harry’s relationship.

“He sits down, everything is fine so far, they’re shaking hands with the people around, Meghan is smiling, and he begins to talk to this man to his left.

“He gets nearer so he can listen, he looks interested, he even reaches out with his right hand to touch the man in a friendly movement, he shakes his hand, and it’s like Meghan can’t stand watching Harry behaving like that, she instantly touches him – she raises her hand to touch him.

“It’s like a cue – that cue means ‘stop doing what you’re doing now’, and Harry literally stops what he’s doing, and she does it again,” Jesús suggested.

“Harry is trying to engage with the man to his left and she keeps touching him, like ‘hey I’m here’. She’s doing it again, I don’t know why she’s so needy, doing it over and over again.

“It’s uncomfortable to watch, and he goes back to his usual, head down demeanour, tense self.

The expert concluded: “The end well, he’s still trying to engage with the man to his side, Meghan stood up first ‘let’s go, time to go.’”

Jesús Enrique Rosas is a Body Language expert and Persuasion consultant. He has written several books, and conducts masterclasses in body language analysis for Knesix Insitute.