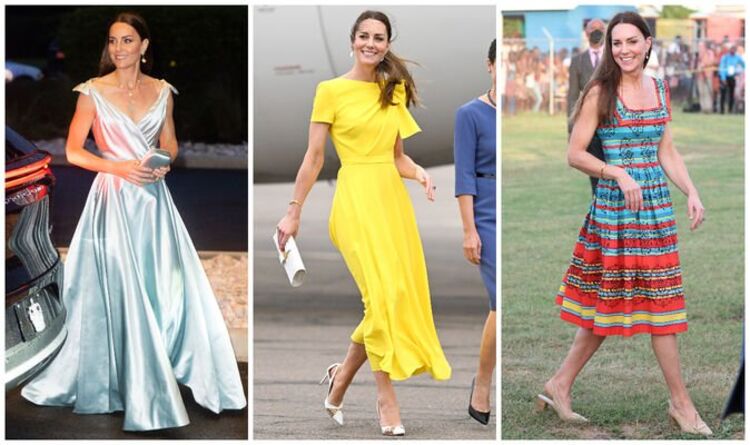 
Kate Middleton has been a working royal for 11 years and gained a reputation for wearing safe shift dresses. However, since the Caribbean tour, these have been replaced by braver looks by more contemporary designers, like The Vampire’s Wife, Alessandra Rich, Roksanda and Self Portrait. Her Caribbean tour wardrobe got everyone talking for all the right reasons.

The Duchess of Cambridge has become the face of the Firm, with more solo engagements and a revamped style.

Daena Borrowman, Marketing Manager at jewellerybox spoke to Express.co.uk about how Kate’s style has evolved during the last decade.

She said: “All of Kate’s outfits have been under worldwide public scrutiny during her transition from a royal love interest, to a royal bride, to the new Duchess of Cambridge and now, one of the most fashionable Queens-in-waiting ever.

“Despite thousands of jaw-dropping looks from Kate, one look from a little over a decade ago still lives in our minds – her wedding dress.

“It feels like yesterday that we saw her get out of the bridal car and walk down the aisle of Westminster Abbey and share a kiss with Prince William on the balcony of Buckingham Palace in that regal Victorian £250,000 Alexander McQueen gown.

“It has made fashion history and will live in our minds forever,” the expert said.

What is one of Kate’s most recent sensational looks?

“Attending the premiere of No Time To Die, she flaunted a very apt Jenny Packham X 007 Collection gold evening gown worth £3,917.

“The heavily embellished gold number was both mesmerising and significant because it was most reminiscent of Kate’s late mother-in-law, Princess Diana.

“In particular, it was reminiscent of Diana’s own Bond premiere dress from 1985 – metallic, with a powerful shoulder and exuding all the aura of a future Queen.”

Kate’s outfits on the Caribbean tour were more colourful and exciting than the Duchess’ normal wardrobe.

A spokesperson from Dalston Mill Fabrics told Express.co.uk: “With the Duke and Duchess of Cambridge’s tour in the Caribbean at a close, it’s fascinating to see the impact of the outfits that Kate Middleton showcased.

“Her Tory Burch floral blue dress tops the list thanks to a massive number of likes on Instagram, and her status as a style icon and inspiration for millions has only been strengthened during this trip.”

A fashion insider who has worked with the Duchess said of the Caribbean tour: “She just kept pulling out look after look, and each one had something about it, whether it was a nod to the current vintage trend or a completely different colour on her,” they told the Evening Standard.

“Her look is much fresher and more modern now, with bold choices that show her growing confidence.”