How the Neon White devs made their ‘stupid,’ ‘really self-indulgent’ game 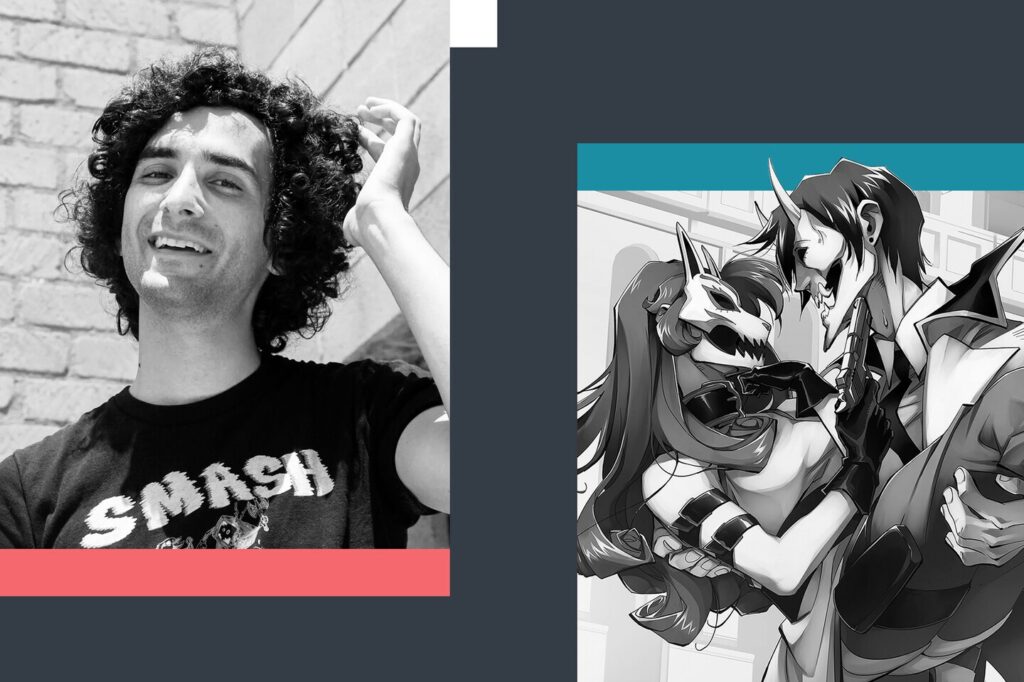 Leap. Dash. Shuffle. Bounce off an inky balloon-shaped demon, and leap again. Plummet. Grapple. And of course, shoot. These are the verbs animating “Neon White,” a fast-paced, first-person shooter that wants to make speed runners out of all of us, and the latest genre-bending title from the mind of Los Angeles-based indie developer Ben Esposito.

After working at developer Giant Sparrow on indie darlings such as “The Unfinished Swan” and “What Remains of Edith Finch,” Esposito would go on to create “Donut County,” an indie success story if ever there was one. Released by arthouse indie game publisher Annapurna Interactive in 2018, the game about raccoon app developers swallowing up Los Angeles with a hole in the ground caught the current of mainstream success.

While Esposito had been the sole developer of a few interactive music videos and saw some success with his 2016 Furby survival horror game “Tattletail,” “Donut County” was different. Esposito was the sole name behind a game that would break out of the indie sphere and into the spotlight of the larger gaming world. Its single mechanic, moving around an ever-growing hole, coupled with a charming, lo-fi art style, made the game approachable and easily adaptable across devices.

“Neon White” isn’t trying to copy that success. It’s not even trying to appeal to everyone. It’s a hyper specific yet hard-to-categorize project that struts around, wearing its inspirations on its sleeve. Don’t like it? Too bad.

In “Neon White,” you play as a damned soul, White, competing with your fellow hell spawn for a chance at penance. White is joined by some old friends, members of a mercenary group who died in a heist-gone-wrong. Together again, they can fight through heaven, slashing and shooting the demons infesting it (and trying to kill each other again) at breakneck speeds.

Upon beating a level, you’re awarded a medal ranging from bronze to ace. Achieve an ace runtime, and you’ll unlock a leaderboard of the fastest times of other players. Maybe someone got the jump a half second before you could, or maybe someone’s halved your time with a shortcut you didn’t know about. Beat a level fast enough, and you may unlock the secret red ace medal. That feeling of wanting to shave fractions of a second off your time is the game’s real origin.

‘Neon White’ makes you feel like a speedrunning god, even if you suck

Building “Neon White’s” first prototype was a reprieve for the developer, something he said he just had to get out of his system in 2017 while working on “Donut County’s” more casual, puzzle-focused gameplay. After that title shipped, Esposito returned to the shelved “Neon White” prototype with fresh eyes. The roguelike deck-builder “Slay the Spire” released around that time, inspiring a wave of indie developers to mix card-based mechanics with other genres, leading to previously unheard of combinations. Esposito was among that crowd, but it took a while to strike gold.

“I was working on that for a month or so, then I almost gave up on it,” he said. “Randomly getting weapons dealt to you is not fun at all, it turns out.”

What saved the project was competition. Esposito dropped the randomized deck approach in favor of looting enemies for cards, which opened up new possibilities for level design. In “Neon White,” each card represents a weapon that, when discarded, activates a movement ability: double jump, dash, grapple and so on. Stringing these together in succession while picking up new cards from fallen foes is the second-to-second objective of any given level. Building levels around specific cards and combos allowed for more interesting challenges for both developer and player, but what really kept Esposito engaged was a message from a friend who demoed the project: “Here’s how long it took me to beat this level.”

“Pfft,” Esposito thought, “I could do better than that.”

Development picked up in earnest in 2019, and this time around, Esposito wasn’t going it alone. Working with a group of indie developers gathered under the name Angel Matrix (the first of many nods to ‘90s anime), Esposito and his team began work on what would become over 100 levels of platforming, shooting and storytelling.

Behold the birth, and resonance, of walking simulators

Going into development for “Neon White,” Esposito decided to forgo any assumptions about what a good fast-paced first-person shooter could be. That approach would lead to a tangle of design decisions that, together, created the genre-defying experience at the core of “Neon White.”

For instance, including a player’s gun in the on-screen user interface wasn’t essential to “Neon White’s” gameplay, so they got rid of it — just one break with convention that had cascading effects. With no physical presence of the player character’s body onscreen, the developers found there was no concept of actions taking time through animations. When players lacked that reference point, the idea of carrying three of the same light machine guns as you jumped off a waterfall didn’t seem quite so bizarre.

“Those early choices to not be beholden to FPS conventions, those are the things that I learned early on that I was able to bring to this and make something that was weird and counterintuitive,” Esposito said.

“Neon White” doesn’t share many similarities with the most popular games in Esposito’s portfolio. Games like “What Remains of Edith Finch” are labeled “walking simulators” (with both affection and derision) for their slow pace, with a narrative experience unfolding largely around the player. Walking is slow. “Neon White” wants you to be constantly thinking of how to be faster.

But Esposito explained that “fast” is a relative feeling, ultimately an effect of what the player has the options to do. In “Neon White,” each level has an obvious path available to players. But to improve their runtimes, players are encouraged to “break” the level in the same way that speed runners do, finding new routes or using the cards they’re dealt in seemingly unintuitive ways.

“It’s not about moments of extremely high speeds, it’s about feeling like you can always be going a little bit faster at any given point in the level,” he said.

Though “Neon White” has been a critical success, many have recoiled at its bombastic and hypersexual writing. But Esposito said he just didn’t want to do “a wholesome thing” again: “I wanted to do something that was just stupid and over the top and really self-indulgent.”

Luckily he had some of the best people on-hand to make an uncouth, anime-fueled assault on all things holy: visual novel developer Aevee Bee (“We Know the Devil”), animator Ryann Shannon (storyboard artist on “Infinity Train”) and Geneva Hodgson (“Trick Moon”), character designer, co-creator and Esposito’s wife. Together, the group made a character-driven crime drama about explosions, sex and dead gods.

“Its wacky,” he acknowledged with a laugh.

The story breaks also serve as a reprieve from the game itself, a chance to slow down and recoup before setting off again on another string of levels at ever faster speeds. That juxtaposition is stark — and intentionally so — something Esposito said he learned from “late ‘90s Japanese import games that had pre-rendered cutscenes and fast video game[play].”

Ultimately though, Esposito wasn’t concerned about cohesion between the story and gameplay. “Ludonarrative dissonance?” he said, referring to a line of critique in games studies that highlights gaps between gameplay and narrative. “Awesome, I don’t give a s—.”

“Neon White’s” popularity came as a surprise to the team. The game is a pastiche of early 2000′s video games and anime, featuring the voice of Steve Blum, best known for his portrayal of Spike Lee in the English dub of “Cowboy Bebop,” a staple of Adult Swim and its Toonami programming block since the series premiered in the U.S. in 2001. If you weren’t there, or haven’t read-up on the lineage of “Counter Strike: Source” and “Trigun’s” influence, “Neon White” can appear inimical.

Esposito gets that: “Sometimes when people don’t get what we’re trying to do, I just think, ‘Oh you haven’t played enough localized, mid-budget PS Vita games.’ ”

The team steeled itself for rejection.

“We thought we were like ‘screw the awards,’ we’re just going to make something that feels cool and fun,” Esposito said. “But it was totally the opposite. People get it. They talk about the ways that — even though it’s counterintuitive — it works together. So we’re just shocked to be honest. It’s very cool.”

Unlike White, Esposito isn’t trying to come off as a suave action hero. You don’t get a game like “Neon White” by trying to be cool — or trying to design something with the goal of making it “cool.” It’s a passion project through and through, from level design to character writing to thematic through lines.

As Esposito would put it: It’s “purely vibes-based, ultimately.”

Autumn Wright is a freelance games critic and anime journalist. Find their latest writing at @TheAutumnWright.