How a medication abortion, also known as an ‘abortion pill,’ works 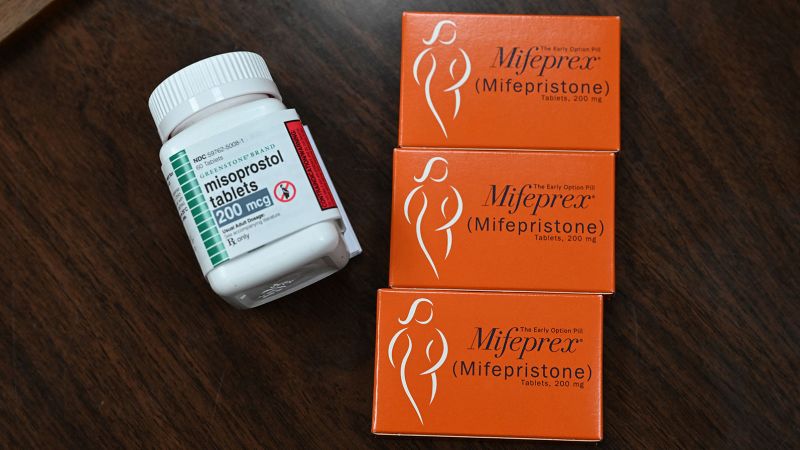 Mifepristone, one of the two drugs used for medication abortion, may soon be available at some retail pharmacies, according to a new ruling by the US Food and Drug Administration.

Mifepristone blocks the hormone progesterone, which is needed for a pregnancy to continue. The drug is approved to end a pregnancy through 10 weeks’ gestation, which is “70 days or less since the first day of the last menstrual period,” according to the FDA.

In a medication abortion, a second drug, misoprostol, is taken within the next 24 to 48 hours. Misoprostol causes the uterus to contract, creating cramping and bleeding. Approved for use in other conditions, such as preventing stomach ulcers, the drug has been available at pharmacies for decades.

Together, the two drugs are commonly known as the “abortion pill,” which is now used in more than half of the abortions in the United States, according to the Guttmacher Institute, a research group that supports abortion rights.

“While many women obtain medication abortion from a clinic or their OB-GYN, others obtain the pills on their own to self-induce or self-manage their abortion,” said Dr. Daniel Grossman, a professor of obstetrics, gynecology and reproductive sciences at the University of California, San Francisco.

“Some people do this because they cannot access a clinic — particularly in states with legal restrictions on abortion — or because they have a preference for self-care,” Grossman said. “A growing body of research indicates that self-managed abortion is safe and effective.”

What happens during a medication abortion? To find out, CNN spoke with Grossman, who is also the director of Advancing New Standards in Reproductive Health, a research group that evaluates the pros and cons of reproductive health policies and publishes studies on how abortion affects a woman’s health.

This conversation has been edited for clarity.

CNN: What is the difference between a first-trimester medication abortion and a vacuum aspiration in terms of what a woman experiences?

An injection of local anesthetic is given to the area around the cervix, and the cervix is gently dilated or opened up. Once the cervix is opened, a small straw-like tube is inserted into the uterus, and a gentle vacuum is used to remove the pregnancy tissue. Contrary to what some say, if the procedure is done before nine weeks or so, there’s nothing in the tissue that would be recognizable as a part of an embryo.

The aspiration procedure takes just a couple of minutes; then the person is observed for one to two hours until any sedation has worn off. We also monitor each patient for very rare complications, such as heavy bleeding.

Grossman: A medication abortion is a more prolonged process. After taking the pills, bleeding and cramping can occur over a period of days. Bleeding is typically heaviest when the actual pregnancy is expelled, but that bleeding usually eases within a few hours. On average people continue to have some mild bleeding for about two weeks or so, which is a bit longer than after a vacuum aspiration.

Nausea, vomiting, fever, chills, diarrhea and headache can occur after using the abortion pill, and everyone who has a successful medication abortion usually reports some pain.

In fact, the pain of medication abortion can be quite intense. In the studies that have looked at it, the average maximum level of pain that people report is about a seven to eight out of 10, with 10 being the highest. However, people also say that the pain can be brief, peaking just as the pregnancy is being expelled.

The level of cramping and pain can depend on the length of the pregnancy as well as whether or not someone has given birth before. For example, a medical abortion at six weeks or less gestation typically has less pain and cramping than one performed at nine weeks. People who have given birth generally have less pain.

CNN: What can be done to help with the pain of a medication abortion?

Grossman: There are definitely things that can be used to help with the pain. Research has shown that ibuprofen is better than acetaminophen for treating the pain of medication abortion. We typically advise people to take 600 milligrams every six hours or so as needed.

Some people take tramadol, a narcotic analgesic, or Vicodin, which is a combination of acetaminophen and hydrocodone. Recent research I was involved in found medications like tramadol can be helpful if taken prophylactically before the pain starts.

Another successful regimen that we studied combined ibuprofen with a nausea medicine called metoclopramide that also helped with pain. Other than ibuprofen, these medications require a prescription.

Another study found that a TENS device, which stands for transcutaneous electrical nerve stimulator, helps with the pain of medication abortion. It works through pads put on the abdomen that stimulate the nerves through mild electrical shocks, thus interfering with the pain signals. That’s something people could get without a prescription.

Pain can be an overlooked issue with medication abortion because, quite honestly, as clinicians, we’re not there with patients when they are in their homes going through this. But as we’ve been doing more research on people’s experiences with medication abortion, it’s become quite clear that pain control is really important. I think we need to do a better job of treating the pain and making these options available to patients.

CNN: Are there health conditions that make the use of a medication abortion unwise?

Grossman: Undergoing a medication abortion can be dangerous if the pregnancy is ectopic, meaning the embryo is developing outside of the uterus. It’s rare, happening in about two out of every 100 pregnancies — and it appears to be even rarer among people seeking medication abortion.

People who have undergone previous pelvic, fallopian tube or abdominal surgery are at higher risk of an ectopic pregnancy, as are those with a history of pelvic inflammatory disease. Certain sexually transmitted infections can raise risk, as does smoking, a history of infertility and use of infertility treatments such as in vitro fertilization (IVF).

If a person is on anticoagulant or blood thinning drugs or has a bleeding disorder, a medication abortion is not advised. The long-term use of steroids is another contraindication for using the abortion pill.

Anyone using an intrauterine device, or IUD, must have it removed before taking mifepristone because it may be partially expelled during the process, which can be painful.

People with chronic adrenal failure or who have inherited a rare disorder called porphyria are not good candidates.

CNN: Are there any signs of trouble a woman should watch for after undergoing a medication abortion?

Grossman: It can be common to have a low-grade fever in the first few hours after taking misoprostol, the second drug in a medication abortion. If someone has a low-grade fever — 100.4 degrees to 101 degrees Fahrenheit — that lasts more than four hours, or has a high fever of over 101 degrees Fahrenheit after taking the medications, they do need to be evaluated by a health care provider.

Heavy bleeding, which would be soaking two or more thick full-size pads an hour for two consecutive hours, or a foul-smelling vaginal discharge should be evaluated as well.

One of the warning signs of an ectopic pregnancy is severe pelvic pain, particularly on one side of the abdomen. The pain can also radiate to the back. Another sign is getting dizzy or fainting, which could indicate internal bleeding. These are all very rare complications, but it’s wise to be on the lookout.

We usually recommend that someone having a medication abortion have someone with them during the first 24 hours after taking misoprostol or until the pregnancy has passed. Many people specifically choose to have a medication abortion because they can be surrounded by a partner, family or friends.

Most people know that the abortion is complete because they stop feeling pregnant, and symptoms such as nausea and breast tenderness disappear, usually within a week of passing the pregnancy. A home urine pregnancy test may remain positive even four to five weeks after a successful medication abortion, just because it takes that long for the pregnancy hormone to disappear from the bloodstream.

If someone still feels pregnant, isn’t sure if the pregnancy fully passed or has a positive pregnancy test five weeks after taking mifepristone, they need to be evaluated by a clinician.