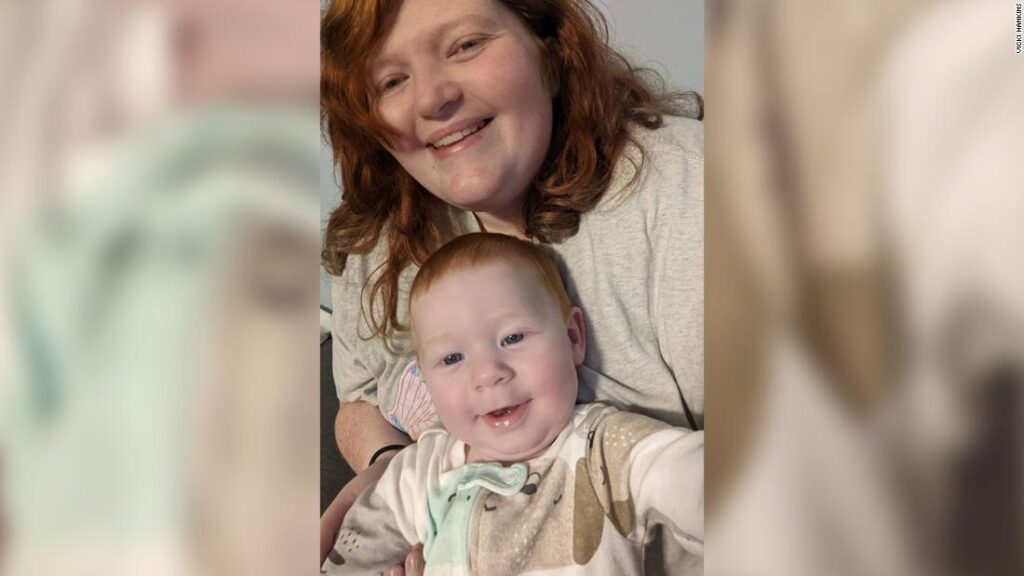 “My husband got two bottles at Walmart, and that’s the last time we’ve seen it in stores,” Hankins, who lives in Prince George County, Virginia, said in an interview with CNN.

Hankins’ son, Orrin, is now 8 months old. She feeds him Similac Alimentum because he is allergic to some of the ingredients in milk-based formulas.

The family depends on a program called WIC — the special supplemental nutrition program for Women, Infants, and Children — to afford their groceries. Hankins said WIC has been especially helpful because it covered Orrin’s formula, which costs between $250 to $300 a month.

But when Orrin’s formula disappeared from store shelves amid the formula shortage, the help she got through WIC to pay for it did, too.

Hankins said she can usually find Alimentum through the Similac website or other retailer’s websites. But because their WIC benefits won’t cover online purchases, when she orders formula that way, it cuts deeply into the family’s budget.

About half the baby formula purchased in the United States is purchased through the WIC program.

According to the US Department of Agriculture, no states currently allow WIC recipients to use their benefits online, although some are trying to move in that direction.

For now, families have to drive, sometimes for hours, to find formula on the shelves of stores that will accept their benefits.

Hankins is a member of a Facebook group for moms in her area that are looking for formula. They fan out and take photos to post to the group to save other parents some time. They stay in constant communication.

“We’ve searched from the beaches to the mountains and can’t find anything,” Hankins says.

Seven states — Minnesota, Iowa, Nebraska, Massachusetts, Washington, South Dakota and Nevada — have gotten funding for pilot programs that would make e-commerce possible for their WIC families, but those programs are months away from starting. Most won’t begin until 2023, according to the United States Department of Agriculture and state health departments involved in the pilot project.

The reasons for that are legal and technological.

Federal law requires that WIC recipients sign their name or enter a PIN number at the time they receive their groceries. For e-commerce, the government would have to waive this requirement for states.

The technological hangups are trickier. Families on WIC get their benefits through a smart card that looks a debit card, but it doesn’t work quite the same way. Debit cards deduct the cash value of a purchase from a bank account; WIC cards actually keep track of the number of items a person purchases. A card might allow someone to buy three cans of baby formula a month, for example. WIC foods must meet certain nutritional requirements, so the cards also restrict the type of products that can be purchased.

In order to move those smart cards online, stores have to build new systems to do it. That work is underway, but it is going to take a while. Even when these pilot projects get underway, WIC shoppers will only be able to purchase foods online at one store.

“There’s no way to quickly move to online ordering at this point,” said Geraldine Henchy, director of Nutrition Policy and Early Childhood Programs at the Food Research and Action Center in Washington, DC. “They can’t do it. It’s too complicated, and it’s a security risk. So they can’t pivot to just go to online ordering for WIC,” Henchy said in an interview.

‘It feels to us like we’re being left behind’

That’s deeply disappointing to Hankins, the Virginia mom. The hundreds of dollars they are spending on baby formula each month are hitting their budget hard. She says her husband used to buy lunch at the Walmart store where he works every day. Now he’s taking leftovers. They’re limiting their car travel because gas is so expensive. They’re stretching every dollar.

“I’ve emailed my representatives, my senators, I’ve done everything I can because it feels like to us like we’re being left behind,” she says.

The USDA says it’s aware there’s a need to be able to use WIC benefits online. They say they’re working toward that.

“Because the WIC transaction is a prescription of supplemental foods and not a cash benefit, it is a complicated transaction to develop and implement. While WIC state agencies and their partners are working swiftly to establish a solution for online ordering, this process takes time. Food and Nutrition Service is committed to making online shopping a reality in the WIC Program and is providing resources and technical assistance to WIC state agencies to achieve this,” according to a USDA spokesperson.

Meanwhile, out-of-stock rates for formula show little sign of improvement More than 21% of formula products — powder, ready-to-drink and liquid — were out of stock during the week ending June 19, compared with a typical rate of 10% before a nationwide infant formula recall by Abbott Nutrition happened in February.

Stock rates for powder formula, specifically, are even worse. More than 27% of powder formula products were out of stock during the week ending June 19, up from 25% the prior week and 23% the week before that, according to data from the market research company IRI.

Supply continues to be spotty because the Abbott plant that once produced a significant amount of medical, specialty and powdered Similac formula for the US remains closed after recent storm damage, with no updates on when it will reopen.

The Biden Administration has partnered with international companies to fly in tons of formula from overseas, and some of that formula will make its way to brick and mortar stores. But some of that formula is still out-of-reach for WIC families because it is being sold exclusively online.

On June 9, for example, 62,500 cans of Nan Supremepro1, a formula manufactured by Nestle in Germany, were flown into Dallas-Fort Worth airport. All of that shipment will be sold through online retailers, including Amazon.com, Nestle.com, Kroger.com and Walmart.com.

“This is a new product to the U.S. market and so will be available online only as a means to provide parents and caregivers information and instructions on how to use it,” the company said in statement to CNN.

Nonprofits step up to help

Stephanie Spencer hears about the financial pressure WIC families are feeling. Spencer is the founder and director of a nonprofit called Urban Baby Beginnings.

She recently got a $180,000 grant from the city of Richmond, Virginia, to give microgrants to WIC families who are paying for formula out-of-pocket.

“What we’re currently doing is offering $125 gift card to WIC families who have infants under the age of one who are city of Richmond residents,” Spencer says. “The goal was to expand the offerings for WIC families.”

“If, you know, they go to a store such as a Target or another place that may not accept it and be able to purchase those cans of formula that they so desperately need,” she says. The Visa gift cards can be used in stores and also online.

She says the program has been running for about three weeks. She’s had more than 800 applications for the gift cards. She says she’s been at every event where they’ve handed the cards out, and it’s heartbreaking.

“You can see the moms are frantic and they’re trying to pull together like through these formula swap groups and things like that,” she says.

“You see families talking about the fact that they have a supply for a couple of days and then they have to go right back out again and look for more,” Spencer adds.

Thanks to recent donations from friends and family, Vicki Hankins says she currently has 10 days’ worth of formula for her son. It feels like a luxury.

“I’m so thankful to the people that have helped me,” she says. “I just I can’t believe it, and I can wait a few days before I go out again.”

In the meantime, she worked with her local WIC office and pediatrician to change to a different brand, which hopefully her son can tolerate. She says her fingers are crossed for a successful, and available, switch.

CLARIFICATION: Based on updated information, this story clarifies the length of time Vicki Hankins has been on a hunt for baby formula.