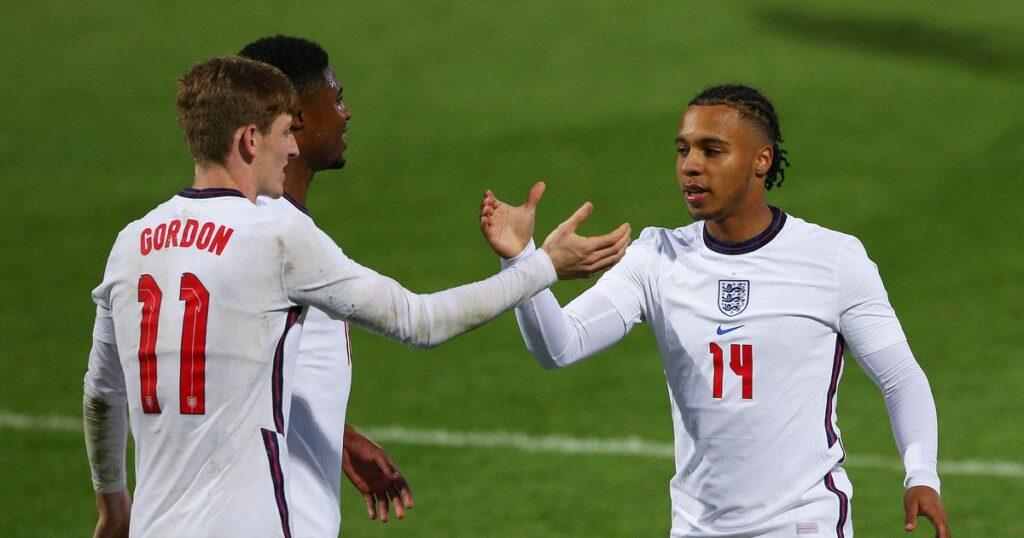 Everton youngster Anthony Gordon has set his sights on breaking into Gareth Southgate’s England senior set-up ahead of the World Cup in Qatar, and that could be good news for Hull City ace Keane Lewis-Potter.

Gordon delivered a terrific wing display for England’s Under-21 side on Tuesday night, as they cruised to a 3-0 win over Albania and secure their safe passage into next summer’s European Championships in Georgia and Romania with two qualifying games to spare.

City star Lewis-Potter once again had to be patient for his chance having not been involved in the crucial win in the Czech Republic last Friday, coming off the bench in Chesterfield to replace Gordon with eight minutes left.

The Young Lions will look to make it seven successive wins in Group G when they face Kosovo on Friday evening (7pm) with Lewis-Potter hoping for a first start, but Gordon’s desire to be the player to break into Southgate’s plans ahead of Qatar, would see the door open for the Tigers talisman to gain regular minutes for the Under-21s.

“This team is so competitive, so to push on into the seniors, I’ve really got to excel first so that’s my concentration for now, being the best I can be here and hopefully giving the manager a bit of a headache,” Gordon told Hull Live. “I’ve always got so much belief in myself and that is my goal. There are some unbelievable players in there at the minute, it’s such a hard team to break into so I’ve got to keep doing my bit with assists and goals and push on to make the manager make a decision. It’s such a good team, so we’ll see.”

Gordon, who shone during a difficult season with relegation-threatened Everton, admits he talks about England duty regularly with Toffees boss Frank Lampard in the hope of leaning on the ex-Three Lions ace for some key advice. “I speak to him regularly because he’s obviously played, and stuff. He knows what’s required to push on into the first team, and he probably knows (Gareth) Southgate and has that relationship, so he knows what to look for in a player, and he tells me what I need to do.”

And that advice from Lampard is simple: ‘Score and get assists, I’m not quite at his level yet but I’m trying.”

Lewis-Potter will hope to be involved in tonight’s game in Kosovo, and you can follow the game in full with Hull Live before the curtain comes down on the Young Lions’ qualifying campaign at Huddersfield Town’s John Smith’s Stadium on Monday evening.