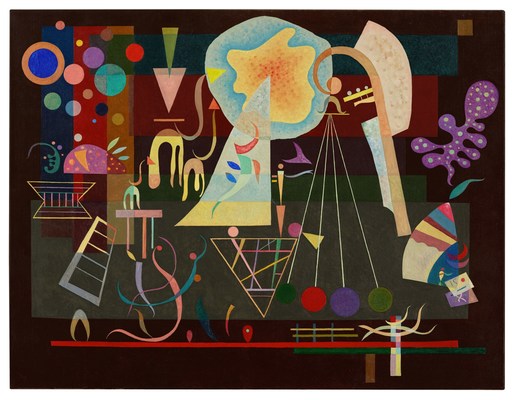 As the Hong Kong art market develops at a phenomenal pace, London is relatively less attractive than it was ten years ago. Christie’s, Sotheby’s and Phillips are now selling certain Western masterpieces – for example, by Basquiat, Still, Richter and Ghenie – in Asia rather than in London, reflecting a general shift of the global art market towards the East. Artprice looks more closely at this phenomenon in its latest Contemporary art market report.

thierry Ehrmann , CEO and Founder of Artmarket.com and its Artprice department: “The UK (generating 17% of global auction turnover in H1 2021) has little to fear from France (7%), but is seeing Hong Kong (14%) attract a growing share of the high-end market, particularly works of Contemporary and Post-War Art which have greater soft power significance. I expect to see London make a concerted effort to retain its hold on this segment of the market”.

Market tipping to the East
The most important painting by Gerhard Richter to be auctioned over the past three years, Abstraktes Bild (649-2) (1987), was sold by Sotheby’s in Hong Kong for $28 million. Initially marketed in the late 1980s by Galerie Lohrl in Dusseldorf, the painting was resold in New York by Galerie Barbara Mathes.

However, on 6 October 2020, Patrick Drahi’s auction firm (Sotheby’s) chose to include it in a prestigious evening sale in Hong Kong where it fetched $10 million more than its high estimate of $18 million.

The itinerary of this painting clearly reflects Richter’s success on the international art market, but it also reflects a fundamental reality of the global art mMarket: Hong Kong is fast becoming what New York was for European artists ten years ago: a formidable accelerator. The major auction houses are seeing Hong Kong as a new market for iconic pieces but also as a marketplace capable of rapidly boosting young emerging stars.

This year – for the first time ever – Christie’s and Sotheby’s offered a total of three major works by Jean-Michel Basquiat in Hong Kong where they either reached or substantially exceeded their estimates. Together, the three paintings generated over $100 million, a third of the artist’s total auction turnover so far this year. Hong Kong is therefore becoming the world’s second marketplace for this ‘devilish’ signature, after New York.

Two completely different structures
Politically, London and Hong Kong are both experiencing pivotal moments in their histories. but while the former has seen its art sales declining over the last five years, the latter has been experiencing exceptional growth in this domain.

True, the two marketplaces still have very different structures. The UK may be seeing its former colony catching up in terms of fine art auction turnover, but it retains a much more dynamic and diversified offer thanks to its long art market history. The British capital has been at the center of international art auctions since the 19th century, whereas Hong Kong has only been an important market hub since the beginning of this millennium …i.e. not more than 20 years.

This is more or less the global art market context as London’s Frieze Art Fair resumes this week, and there can be no doubt that many of its organizers and participants will be hoping to bring London back into the International art market limelight, offering a savvy mix of Old Master and Ultra-Contemporary artworks.

About Artmarket:
Artmarket.com is listed on Eurolist by Euronext Paris, SRD long only and Euroclear: 7478 – Bloomberg: PRC – Reuters: ARTF.

Artmarket is a global player in the Art Market with, among other structures, its Artprice department, world leader in the accumulation, management and exploitation of historical and current art market information in databanks containing over 30 million indices and auction results, covering more than 770,000 artists.

Artprice Images(C) allows unlimited access to the largest Art Market image bank in the world: no less than 180 million digital images of photographs or engraved reproductions of artworks from 1700 to the present day, commented by our art historians.

Artmarket with its Artprice department accumulates data on a permanent basis from 6300 Auction Houses and produces key Art Market information for the main press and media agencies (7,200 publications). Its 4.5 million ‘members log in’ users have access to ads posted by other members, a network that today represents the leading Global Standardized Marketplace(R) to buy and sell artworks at a fixed or bid price (auctions regulated by paragraphs 2 and 3 of Article L 321.3 of France’s Commercial Code).

Artmarket with its Artprice department, has been awarded the State label “Innovative Company” by the Public Investment Bank (BPI) (for the second time in November 2018 for a new period of 3 years) which is supporting the company in its project to consolidate its position as a global player in the market art.

Index of press releases posted by Artmarket with its Artprice department:

Discover the alchemy and universe of Artmarket and its artprice department  headquartered at the famous Organe Contemporary Art Museum “The Abode of Chaos” (dixit The New York Times):