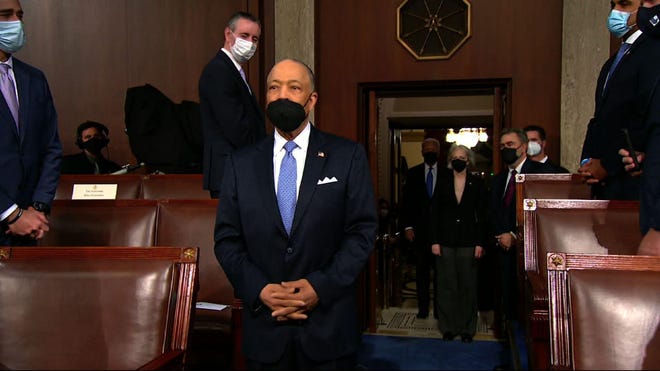 
Biden to discuss Russia, COVID in State of the Union address

President Joe Biden will deliver his first State of the Union address Tuesday to a nation eager to move on from the deadly coronavirus pandemic but facing worries over inflation and conflict with Russia. Biden’s remarks to a joint session of Congress will give him a chance to trumpet his administration’s accomplishments during his first year in office and lay out policy goals for the coming year. The speech won’t be his first major address to Congress. Last April, just three months after taking office, Biden struck an optimistic tone during a joint session of Congress, but that speech wasn’t technically a State of the Union address. Following the Tuesday night address, Iowa Gov. Kim Reynolds will give the Republican Party’s rebuttal. The last State of the Union was delivered by former President Donald Trump on Feb. 4, 2020.

Prefer to listen? Check out the 5 Things podcast:

Satellite imagery showed a 40-mile convoy of Russian tanks and military vehicles moving toward the Ukrainian capital of Kyiv Tuesday, the sixth day of the war after video captured residential areas being shelled in Ukraine’s second-largest city. But even as Russia intensified the shelling, the Kremlin has found itself increasingly isolated by tough economic sanctions that have sent its currency plummeting. Moscow conceded Monday that Western sanctions were affecting Russia’s economy, but remained confident the effects could be dampened. “The economic reality has considerably changed,” Dmitry Peskov, the Kremlin’s spokesperson, said during a press call, according to reports. “But Russia has the potential to offset the harm.” After a first session of talks between Ukraine and Russia yielded no stop in the fighting, both sides agreed to another meeting in coming days. Ukrainian President Volodymyr Zelenskyy said he believed the stepped-up shelling was designed to force him into concessions.

Some taxpayers can expect their tax refund in the coming days

It’s tax time, and many individuals and families are eager to receive a refund. Those who claim the Earned Income Tax Credit (EITC) or the Additional Child Tax Credit (ACTC) can expect their tax refund on Tuesday if the following are true: You filed your return online; you chose to receive your refund by direct deposit; and the IRS found no issues with your tax return. As a note, it could take a few extra days for your bank to accept your refund payment – so don’t be alarmed if you don’t see a payment on March 1. If you’re still waiting for your tax refund and want to get an idea of your expected payment timeline, use the Where’s My Refund tool, which is made available by the IRS.

Major League Baseball extended its deadline for reaching a labor deal to Tuesday at 5 p.m. ET for salvaging opening day as scheduled on March 31 and with it, a full 162-game season. Locked-out players and team owners engaged in a series of intense negotiations that began Monday and stretched into early Tuesday morning in Florida as the sides attempted to forge the path to an agreement. They halted talks for the night around 2:30 a.m. ET and planned to resume at 11 a.m. As the lockout reached its 90th day, players and owners made progress toward a deal but remained far apart on key issues. USA TODAY Sports baseball columnist Bob Nightengale tweeted early Tuesday that, “The two sides have reached agreement on a 12-team playoff pool but still are apart on the luxury tax threshold, minimum salary, and pre-arbitration bonus pool.” In a separate tweet, Nightengale quoted a MLB spokesman as saying, “We made progress and want to exhaust every possibility.”

It’s Mardi Gras! What the holiday celebrates, and how to partake

Tuesday is Mardi Gras, which means it’s time to break out your best outfit and don your purple, gold and green beads. Mardis Gras is the French translation for ‘Fat Tuesday,’ also called Carnival Tuesday and Pancake Tuesday. The day, filled with indulgence and celebration, always comes before Ash Wednesday, which marks the season of fasting for Christians. Fat Tuesday became an official holiday in Louisiana in 1875, and celebrations date back to Medieval Europe. In New Orleans, Mardi Gras celebrations grew out of Catholicism but also wove in “French celebrations, African music and the masquerade tradition,” historian Karen Leathem said. Everything from eye masks to those colorful beads to the krewes of New Orleans putting on parades hold this cultural significance. Learn more here about how the locals celebrate!