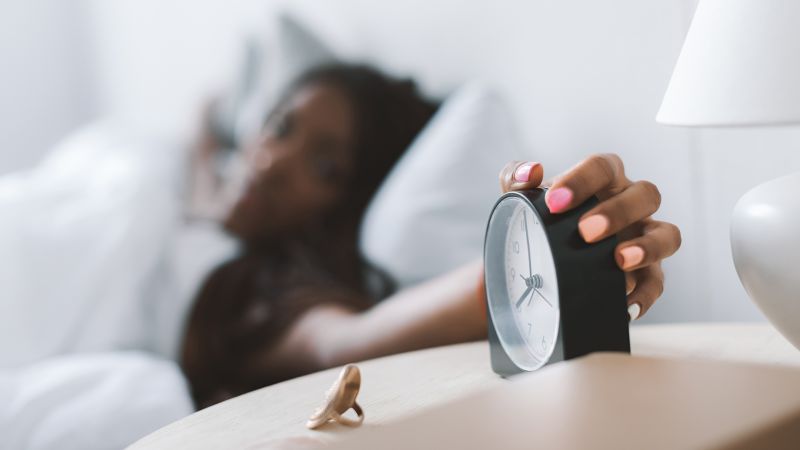 As the United States rolled back the clocks one hour this month to observe the end of Daylight Saving Time, many people got a bit more sleep than usual – but some not as much as others.

Growing evidence shows that lack of sleep and sleep disorders, such as obstructive sleep apnea, remain more prevalent in Black, Asian, and Hispanic or Latino communities, and these inequities can have long-term detrimental implications for physical health, even raising the risk of certain chronic diseases.

Meanwhile, Daylight Saving Time itself – enacted in the US to reduce electricity usage by extending daylight hours – has long been controversial in the United States.

The American Academy of Sleep Medicine, the Sleep Research Society and other medical groups have advocated for ending the practice, calling for the adoption of a permanent standard time that would not involve shifting forward each spring and falling back each autumn.

“Daylight saving time is associated with increased risks of sleep loss, circadian misalignment, and adverse health consequences,” Dr. Beth Malow, professor of neurology and pediatrics and director of the Vanderbilt University Medical Center Sleep Division in Nashville, said in a news release this month. She authored a paper, published in September in the journal Sleep, detailing the potential health benefits of adopting a permanent standard time.

In March, the US Senate unanimously passed the Sunshine Protection Act, which would make Daylight Saving Time permanent across the country – meaning there would be no reverting to “standard time” from early November through mid-March – but the legislation would have to pass the House and earn President Joe Biden’s signature before becoming effective in November 2023.

Now, some sleep researchers worry about the potential effects that continuing to change standard time twice each year may have on sleep health inequities.

“Poor sleep is associated with a host of poor health outcomes, including obesity, hypertension, type 2 diabetes, cardiovascular disease and certain cancers, including of the breast and colon. Many of these health outcomes are more prevalent in the Black population,” said Chandra Jackson, a researcher and epidemiologist with the National Institute of Environmental Health Sciences, who has been studying racial and ethnic disparities in sleep.

“Experimental as well as observational studies have linked sleep to these health outcomes. Therefore, sleep could be an important contributor,” she said. “Fortunately, sleep health is largely modifiable.”

As for the inequities seen in sleep health, it’s not that White adults don’t also experience a lack of sleep and its health consequences – but people of color appear to disproportionately experience them more, and that’s believed to be largely due to social systems in the United States.

Sleep allows the body to restore itself on a cellular level. During quality sleep, your heart rate, blood pressure and breathing can rise and fall, which may be important for cardiovascular health, and your body releases hormones that help repair cells and control its use of energy, according to the National Institutes of Health. These hormone changes also can influence your weight.

A study published in October in the journal PLOS Medicine suggests that people 50 and older who sleep five hours or less at night have a higher risk of multiple chronic diseases as they age compared with peers who get a longer night’s rest.

Separate research, also published in October in the journal of the American Heart Association, shows that cardiovascular health guidelines are more effective at predicting a person’s risk of heart disease if they include sleep – and not focus solely on diet and exercise.

Certain physiologic processes – such as immune function, cardiovascular health and memory formation – require certain amounts of sleep. So without enough sleep, the body and brain may not function optimally, said Dr. César Caraballo-Cordovez, a postdoctoral associate in the Yale-based Center for Outcomes Research and Evaluation who has studied racial and ethnic disparities in sleep duration.

“Short sleep duration has been associated with higher risk of adverse medical events and conditions, including diabetes, obesity, hypertension, heart disease, impaired cognitive functions, and death,” Caraballo-Cordovez wrote in an email, adding that the consensus is that most adults need at least seven hours of sleep per day.

Yet the racial and ethnic disparities in sleep duration appear to be getting worse across the United States, according to recent research by Caraballo-Cordovez, Jackson and their colleagues. Their study, published in April in the medical journal JAMA Network Open, found that among more than 400,000 adults in the US, between 2004 and 2018, the prevalence of short and long sleep duration was persistently higher among those who were Black and Hispanic or Latino. Short sleep is less than seven hours in a day, and long sleep is more than nine hours.

Several social and environmental factors that can interfere with sleep are more common among Black and Hispanic or Latino people in the US, Caraballo-Cordovez said.

“Among those are housing conditions, noise pollution, light pollution, air pollution, stress from different sources – including perceived racial discrimination – and jobs or working conditions,” he said, adding that the convergence of all those factors may explain why getting the recommended amount of sleep “may be less common among Black adults than among White adults.”

Caraballo-Cordovez and Jackson both emphasize that the causes behind the racial inequality of sleep warrant more research.

Many social and environmental determinants of health – including living conditions or work schedules that don’t support sleep – may emerge, at least in part, from historical and persistent forms of structural racism, which Jackson considers as the “totality of ways in which societies foster racial discrimination through mutually reinforcing systems of housing, education, employment, wages, benefits, credit, media, health care and criminal justice.”

Jackson added that she often reflects on how the shooting death of Breonna Taylor in Louisville in March 2020 and the shooting of George Floyd’s 4-year-old grandniece in Houston on New Year’s Day both happened when they were asleep – and how systems of structural racism in the US can cultivate conditions that make such incidents more likely to happen in Black communities. “This would require research,” she said.

Examples of structural racism and how they can have impacts on health include the history of discriminatory mortgage lending and appraisals in the US, which affect the conditions in which people of color may live; how predominantly white school districts tend to get more funding than districts serving people of color, influencing the quality of education some people of color may receive; and even how hair discrimination may contribute to some Black women using potentially harmful chemical hair products because policies might not allow specific hairstyles in school or the workplace.

Although more research on the causes of disparities in sleep is needed, she said, essentially anything that produces physical and psychological stress is a threat to sleep health, and these stressors tend to be more prevalent in Black communities.

In the US Department of Health and Human Services’ Healthy People 2030 plan for the nation, improving health by helping people get enough sleep was listed as a goal, with objectives including increasing the proportion of adults with sleep apnea symptoms getting evaluated by a health care provider and increasing the proportion of schools that start later in the mornings. Improving sleep health has been a national objective in the federal government’s past two Healthy People programs, noted Caraballo-Cordovez, who is not involved in the programs.

But he added that “the impact of strategies focused on improving sleep knowledge and habits – although important and necessary – may be limited if they do not address the persistent barriers that disproportionally prevent Black individuals from achieving and maintaining a healthy life.”